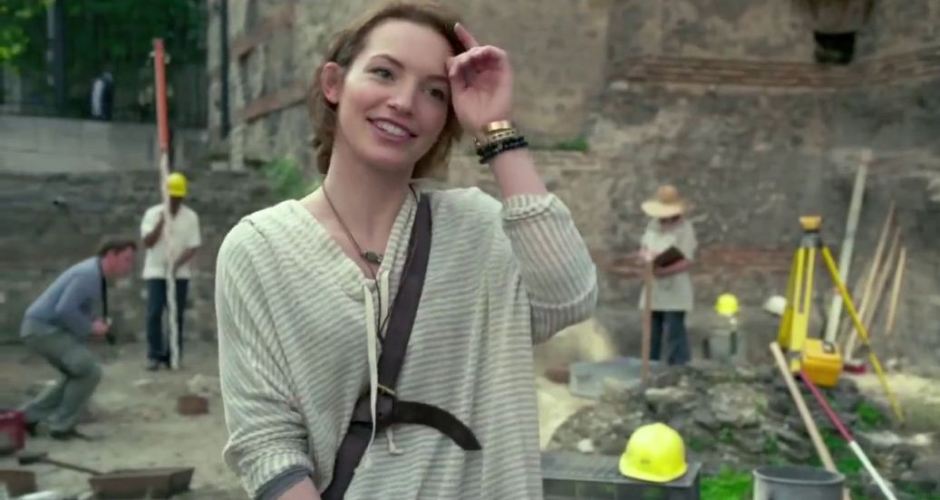 My new series is An Archaeologist Reviews, in which I watch terrible (sometimes good) archaeology movies in order to get a better perspective on what the media portrays vs the reality. First up is As Above So Below, starring Perdita Weeks, which was released in 2014.

I am a huge addict for dramatically fictional accounts of archaeology-gone-wrong. The discipline had been romanticized with grand ideas of treasures, unleashed curses, and  demons concealed for millennia being awoken by archaeologists exploring uncharted territory.  It makes for some exciting cinema, despite the reality being oh so much different. But, let’s be honest the archaeology/adventure genre in movies has been kind of crap of recent, apart from the Indiana Jones series (minus Crystal Skulls) this particular area of cinema has been a let down over and over again. So when I found out about As Above So Below, a horror movie set in the Paris Catacombs I was again skeptical.  Archaeology and horror is not a new concept, movies featuring ruins, mummies have been around since the dawn of cinema.  Despite the constant stream of disappointment I jumped at the chance to see this in the cinema.

Set in the style of a found footage documentary the movie follows Scarlett Marlowe continuing her late father’s work searching for Nicola’s Flamel’s Philosopher’s Stone. The location of the stone is within the Paris catacombs (of course it is!), and despite the dangers of running around in uncharted territory, Scarlett or Dr.Marlowe jumps at the chance of getting her ill-prepared footwear a little wet. The opening scene sees us introduced to archaeologist Scarlett (excuse me Dr. Marlowe), a university professor of a mere 30 years old with two PhDs, and the ability to speak 6 languages and two dead ones (of course!) and an expert in Krav Maga, because she must have ample of times preparing for her illegal adventures and not you know doing any actual research or teaching.  One of these PhDs is in urban archaeology, a master’s chemistry, and a second PhD in the fictitious symbology.

The movie moves along to George, who she enlists to help her uncover the whereabouts of the Philosopher’s Stone, further complicated with their unresolved sexual tension, and that time she left him in a Turkish police station. Charming this Scarlett, I mean Dr. Marlowe. Together they break into churches, defaces archaeological artifacts, and generally cause mayhem around Paris until she makes it illegally into the catacombs.

In the catacombs, the story changes from adventure movie to straight up horror.  As they venture further into the weaving tunnels of the catacombs a strange, singing cult can be heard; a ringing telephone deep underground echoes throughout the tunnels, and ghastly apparitions start appearing.  “The only way out is down,” says La Taupe’, a former friend of their guide who disappeared two years ago after going to explore the catacombs they now find themselves trapped in. They do as he says.

After a number of puzzles and trials, (to be honest too boring to actually write about) they finally find themselves The Philosopher’s Stone! Finally, Dr, Marlowe can vindicate her father, who spent years, writing questionable research papers for reputable academic journals!

But of course in Tomb Raider style, an important magical artifact is of course not what it seems; “it’s a trap!”, and they find themselves cornered with only their smarts and wits to escape. Scarlett figures out ‘as above, so below’. As they descend, they are faced with the same catacombs but reversed. It’s here, in this labyrinth mirror-world, that the deaths begin as they continue to descend over a thousand feet down.

One girl is murdered pretty horrifically by the rabid La Taupe. Benji the cameraman falls down a shaft after a woman lunges at him from the darkness mirroring an earlier, non-fatal tumble. George sees his little brother, who drowned in a cave when they were young, drowning again. Everything becomes a tense maze of ghosts of regrettable secrets that the characters have trouble letting go of.

As a horror movie, there are some genuine scares especially near the end of the movie, when three of the remaining characters are confronted by what is supposedly the devil. The movie uses the jump scare tactic, but also allows for quiet moments where filmmakers leave some points to the imagination. The movie deals with regret and grief much more efficiently than its use of archaeology, allowing the characters to move on physically from their own literal and metaphorical hell.

However, the movie’s main issue is its characters. Firstly, the protagonist Scarlett Marlowe is a questionable archaeologist, much like any media portrayal of the profession, she’s reckless, intrepid and obnoxious. “I’m not doing this for financial gain,” Scarlett says in some interview footage that plays at the end of the film.  Obviously not, because if she tried to get this little adventure published, her professorship will be in the dirt much like the friends she took down there in the first place. Unfortunately, we never get delve into Benji’s regret, and many of the characters apart from George and Scarlett (I mean Dr. Marlowe) are used as death fodder.

Overall, As Above So Below is a semi-decent horror movie with a tense creepy atmosphere.  However, the use of  predictable archaeological tropes to progress the story fails to allow the movie to embrace its weirdness. While Scarlett makes for a decent horror-film protagonist, she has the attributes: resourceful, intelligent, brave, and of course a complex relationship with her father (Indiana and Lara I’m looking at you)  – I doubt she’d make a very able archaeologist.